With an aging infrastructure and major bridges that are more than 50 years old, the demand put on civil engineers to inspect our transportation system is ever increasing. Federal law requires every bridge over a 20 ft span to be inspected every other year.  In the present technological world, bridge monitoring does not have to rely exclusively on periodic human inspections, but can rely instead on electronically monitoring a bridge’s health, which could expose a structural integrity problem well before it would be detected by a visual bridge inspection.

The civil engineers who have responsibility of keeping the infrastructure sound should become aware of sensor products available that could aid them in evaluating infrastructure condition.  Typically, there are three categories of sensors used for bridge monitoring.  Strain gages measure stress loads in bridge members that can be detected as micro displacements, inclinometers measure gravity-referenced shifts like tilt, twisting, or bending, and linear position sensors measure macro movements of bridge elements like rocker bearings and gusset plates of trusses.  Buckling or tearing of the gusset plates has been identified as one of the most serious structural problems in older truss bridges.

Because the sensor systems needed by bridge monitoring systems have to operate for a long time in extremely harsh environments, not all position sensors are suitable for these stringent applications. The Metrom Rail Safe Structure System utilizing Alliance Sensors Group's LV-45 series inductive linear position sensors is one of them. The sensors are attached to a bridges and its supporting pier to measure movement of the bridge relative to the pier and rockers in all three axes over time and ambient temperature.  Their outputs are processed by a data recording system that periodically updates an off-site monitoring station by cell phone network based transmissions. These sensors have been in service for many months, during which time they experienced the expected seasonal environment variations, all the while providing valuable information to the engineers monitoring the testing data. 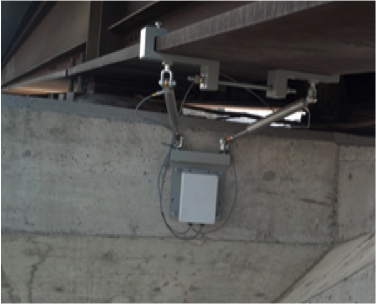 An Overview of "Linear Position Sensors", How They Work, and How to Choose the Right Sensor

To understand what a…