So, the answer to the title question: What's So Good About LVIT Technology is summarized as follows:

- Contactless, frictionless operation with no components to wear out and no ring magnet

- Many sensor sizes and configurations for different position sensing applications

- Less expensive than LDTs and more reliable than in-cylinder potentiometers 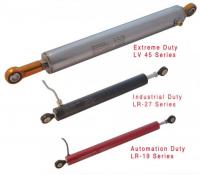 To find out more about this technology read on below.

The acronym LVIT stands for Linear Variable Inductance Transducer. Because LVITs are inductive, they are contactless devices with no friction issues or moving parts that can wear out. As is common for inductive sensors, they exhibit outstanding repeatability, with resolution limited only by the electronics used with them. LVITs offer the performance of contactless sensors like LVDTs or magnetostrictive sensors at a price comparable to industrial grade linear potentiometers.

They are DC in-DC-out sensors constructed with built-in smart electronics that has relatively low power consumption, typically much less than one watt. Because the basic sensor of an LVIT is extremely repeatable, an on-board microprocessor can be used to linearize the sensor's output signal and apply temperature compensation to the system using a built-in temperature sensor. This linearization process yields typical linearity errors of ≤ 0.1% of Full Scale Output (FSO), depending on the number of data points used for the sensor's calibration.

An LVIT sensor uses a long, small-diameter probe coil that is connected into the resonant tank circuit of an oscillator in the built-in electronics. A conductive tube moved over the coil changes its inductance and the resonant frequency of the tank circuit. Oscillator output is coupled to a 12-bit microprocessor in the on-board electronics to measure its frequency. The digital output of the microprocessor then goes to a digital-to-analog converter which develops a voltage proportional to frequency that is conditioned to produce a high level analog DC output from the sensor. The 12-bit microprocessor also determines the resolution of an ASG LVIT position sensor, which is 0.025% of FSO.

One reason for the robustness of LVITs is that the probe coil is wound on a glass-filled thermosetting plastic rod which can survive large deflections without fracturing. Its single coil winding makes only two connections with the electronics, which substantially reduces the likelihood of a failure and enhances reliability. The built-in electronics is completely potted within its housing, so these sensors can sustain high shock and vibration levels. This robustness, coupled with a normal operating temperature range of -20 to 85 C, and an extended operating temperature range of -40 to 105 C, permits an ASG LVIT to function very well in practically any industrial or commercial environment. In special cases where an LVIT might be required to operate in a higher temperature environment, the sensor's electronics may be located in a more benign environment a short distance away from the sensor's probe assembly.

Another reason for an LVITs' robustness is that the sensors' housings are made of heavy wall anodized aluminum or stainless steel and are environmentally sealed to IEC IP-67 or IP-68. The LVITs' operating rods (spoilers) are also stainless steel, and do not easily bend as happens with some other sensors.

Still other configurations available from ASG include sensors specifically made for operation to 5000 psig in hydraulic cylinders, either for port mounting externally or for embedding internally in the cylinder. For these in-cylinder applications, the cylinder rod or ram is gun-drilled with a hole in clearance of the probe coil, which then becomes the spoiler tube for the sensor. There is no need to machine a cavity in the piston for the magnet of a magnetostrictive device or for the spool of an in-cylinder potentiometer.

Besides the LVIT sensors for use in hydraulic cylinders, other pressurized sensors can be built for subsea applications at depths of 12,000 feet in a PBOF environment. There are also short stroke LVITs that operate in a pressurized fluid environment to provide spool position feedback in two-stage electro-hydraulic proportional or servo valves. In this application, the LVIT probe goes into a blind hole in one end of the main spool, which greatly simplifies installation and eliminates any need to mechanically couple a position sensor to the spool.

One valuable feature built into ASG LVITs is a proprietary process called SenSet; which gives a user the ability to match the end points of the sensor's analog output with the ends of the range of motion of a workpiece or the ram of a hydraulic cylinder to which the sensor is attached. This SenSet™ feature permits a user to optimize the position measuring system's resolution over its full range of motion.

ASG LVITs are offered with various connector or cable terminations in axial or radial configurations and can measure full ranges from fractions of an inch to 40 inches, with a resolution of 0.025% of full scale output. Operating from DC power inputs of 5 to 24 Volts, standard LVIT analog outputs include several high level DC voltages and 4-20 mA DC sourcing. Being digital devices, LVIT dynamic responses are shown as update rates, which nominally range from 250 to 500 Hz, depending on the LVIT series.